The founding members had a very strong connection to Soca and Reggae music and to endeavor to educate the general public about this quickly evolving music. The Winnipeg Soca Reggae Music Festival committee has succeeded in providing a three-day celebration of Soca and Reggae music artistes coming from all around the world. From its roots at Central Park where the first Festival was held in 2005 to the Old Market Square in downtown Winnipeg where the Festival has now found a home, the Festival is a truly all-inclusive celebration of the ever-evolving mosaic of music.

The Winnipeg Soca-Reggae Music Festival is a simple love of this beautiful Caribbean culture that brings people together from all races, classes and creeds in a celebration of Soca, Reggae, Calypso and revelry together with Caribbean flavors in downtown Winnipeg at Old Market Square in the heart of the Exchange District BIZ.

What began in 2005 as an event to keep the music of the Caribbean alive has now become a multi-cultural event merging Caribbean and Canadians into a colorful and exciting event celebrated in the second weekend of July. This is evident by the participation in and attendance of the Festival.


What is Soca Music?

Soca is a modern form of calypso with an up-tempo beat. Soca music originated as a fusion of calypso with Indian rhythms, thus combining the musical traditions to the two major ethnic groups of Trinidad and Tobago. Innovative Montserrat singer Arrow did much to popularize soca internationally with his 1983 number one soca classic Hot Hot Hot. Soca has continued to grow and evolve giving rise to offshoots such as ragga soca and the increasingly popular chutney soca. Today soca is the definitive indigenous musical form associated with the Eastern Caribbean. Thanks, Lord Shorty.


What is Reggae Music?

The roots of modern Jamaican music can be found in the sound systems of the 1950's. Reggae music is a Jamaican style of music that has roots in African music and rhythm and blues, or early rock and roll. Reggae songs are usually about social issues, politics and the Rastafarian religion, an African religion that many Jamaicans follow. An early form of reggae was ska music. Ska is a faster, upbeat style of music that was influenced by the New Orleans rhythm and blues music heard on U.S. radio stations in Jamaica. Reggae music characteristics include offbeat syncopation, upstroke guitar strums and chanting lyrics. Bob Marley and the Wailers became a well-known reggae group in the 1970's. They helped to spread reggae music internationally.


What is Steelband Music?

The steeldrum (pan) is the national musical instrument of Trinidad and Tobago developed in the late 1930's. The pan is the only original non-electronic musical instrument invented in the twentieth century. Today the pan is very much part of the carnival mosaic from Panorama, Pan on the Road to Bomb Tune competitions for the best playing steelband (panside) with respect to it tune selection. The three basic types of pan are tenor pans that play melody, rhythm pans that play harmony, and bass pans. A steelband can play a wide range of music which include, soca, calypso, classical, rock, reggae, jazz, pop, latin and rhythm and blues.


The Festival has a simple mission.

To encourage involvement in the development of Soca and Reggae Music.

To promote cultural awareness of Soca and Reggae Music.

To produce an annual festival showcasing Soca and Reggae Music.

To lobby mainstream media to give more airplay to Soca and Reggae Music.

We encourage you to be part of this multi cultural Caribbean event in Winnipeg. 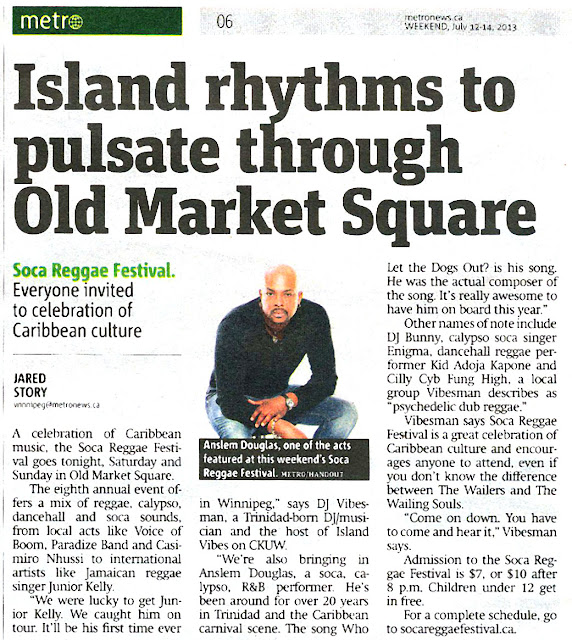